We are excited to announce this years Class of 2020 Hall of Fame inductees. 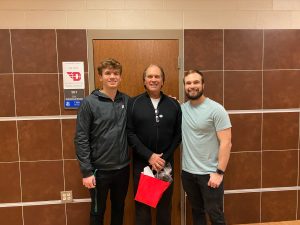 Mike was a three year letterman in baseball.  He was selected All Miami Central Conference as a 1st baseman.  That same year he was also selected MVCBA All Area and AP All Ohio as a  All State Selection at catcher.   Chandler holds the school record for single season putouts (265) and career putouts (501).

Mike was a three year letterman and starter in football, staring at quarterback for the Vikings as a junior and senior.  He was also a member of the basketball team, earning two letters.

Chandler went on to play football at the University of Toledo for one year before transferring to the University of Dayton to once again pursue his baseball career.  While at Dayton, Mike was the starting catcher for the Flyers for three seasons.  His teams held the highest all time winning percentage in school history during those three seasons.  Chandler batted 4th in the line up throughout his career with a .386 batting average.

After college, Mike went to work for National Cash Register before spending 12 years in the hearing aide field and 25 years as a contract manufacturer with cables and connectors.  Mike is currently working as a real estate investor.  He resides in Springboro and has three children – Christina, Cole and Luke. 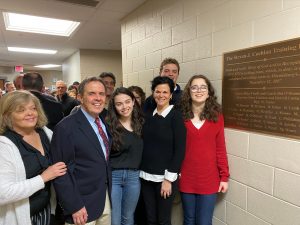 The wrestling program was looking for a facility to call their own in the early 2000’s.  After many years of sharing space and practicing in an elementary gymnasium, Steve made a contribution to the Miamisburg Wrestling Boosters that allowed them to thrive for years to come.  The contribution made it possible for the program to secure an off-campus facility to hold practices and grow their numbers.  This generous donation was a huge part of the wrestling program’s success during this time period as it served wrestlers of all ages within the community.

Although Steve did not arrive at Miamisburg until March of his freshman year, he was one of only four sophomores to letter in football and was both a three-year letterman and three-year captain of the wrestling team.  In addition, he was a three-time Regional Qualifier in wrestling.  Steve was the first MHS wrestler to receive a #1 seed at the OHSAA Sectional tournament.  He was also part of the high school’s first, and only, undefeated dual meet season as a junior in 1971-72.  He recorded a 21-1 record in dual meets throughout his junior and senior seasons and still holds a number of wrestling team records.

Steve earned his B.S.B.A. Degree in Accounting at Bowling Green State University and is currently a member of the Bowling Green President’s Club.  Steve founded The Cochlan Group, inc. in 1998 and serves as its President and Chief Executive Officer.  Regarded as a pioneer in the design, implementation and financing of nonqualified executive benefit plans, Steve has served executives and directors of companies, large and small, in diversified industries since 1983.  Steve has served on the Boards of Cornerstone University and Fellowship of Christian Athletes (Wrestling).  He is also a significant contributor to a number of not-for-profit organizations and ministries.  Steve and his wife, Susan, reside in Hinsdale, Illinois and have three children – Cullen, Stephanie and Cassidy. 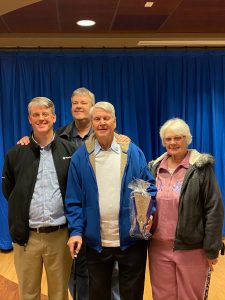 Jim was an All MVL selection in football and a member of the Miami Valley League All Star Team.  In 1957 Hoerner became the 5th athlete in the history of the school to be selected AP All Ohio as an All State Defensive End.  Hoerner was also a member of the Vikings basketball team and a two year letter winner.  In track, Hoerner helped set the shuttle hurdle record as a sophomore in 1956.

Jim went on to play football on a scholarship at Western Kentucky University where he lettered 2 years for the Hilltoppers.

After college, Jim returned to Miamisburg and was a teacher for 33 years in the district. Jim taught industrial technology, biology and drivers education.  He coached football, cross country and track for the Vikings during his career.  Jim currently resides in the Burg.  He and his late wife Susan of 35 years have three children that all played sports and graduated from Miamisburg High School (Michael, David and Bessy) along with seven grandchildren. Jim enjoys attending Miamisburg athletic contest and spending time with classmate, Sharyl Tinnell. 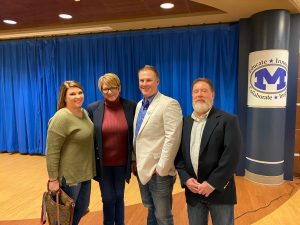 Mote was a three year letterman and two time captain in baseball for the Vikings.  He was a three time All Mid Miami League and All Area selection.   Sam was named  2nd Team All-State in 2006. Mote’s teams were two time MML and District Champions.  He helped lead his team to a Regional Championship and OHSAA DI Final Four appearance in 2006.  Mote is currently tied for most career hits (136) and most hits per game (1.42).  He still holds the school record for most doubles in a season (16).

In addition, Mote was a two year letterman in basketball for the Vikings and a member of the golf team his senior year.

Sam went on to play baseball at Wright State University where he was a member of a Horizon League Championship team and World Series Regional appearance in 2009.

He has been an assistant baseball coach at UC, Iowa Western Community College (World Series Champions), University of Northwestern in OH, and Texas A&M-Corpus Christi.  Sam is currently on staff at Angelo State University.