Bowling’s Senior night was a great success with all the teams winning there matches.We honored five seniors Maddie Ginn ,Emma Boggs,Lain Mitchell,Justin Grice and Cooper Layman. Top senior was Cooper Layman with a 459 series games of 233 and 226 also Justin Grice 213 and 197 for a 410 series and Lain Mitchell’s 360 series and Maddie Ginn’s 357 series and Emma Boggs with a 251 series.The Vikings are back in action Saturday at the GWOC tournament.The coaching staff would like to thank the seniors for there hard work this year.GO VIKINGS!!! 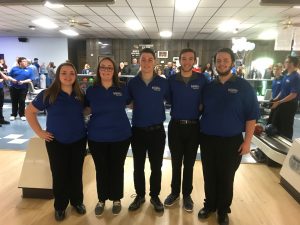